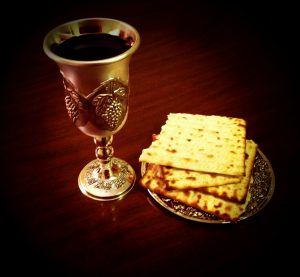 On April 11, 2017 after sundown (Nisan 14 on the Jewish calendar), the Watchtower will hold its annual Memorial service commemorating the death of Jesus Christ, also known as “The Lord’s Evening Meal.”

Bread and wine are passed to all attenders, much as in a church communion service. The big difference is that at almost all of the Kingdom Halls worldwide absolutely no one actually partakes of anything!

This all seems quite normal to Jehovah’s Witnesses, but the first time I experienced it, it seemed quite bizarre. Frankly, it still does.

It’s like being invited to a friend’s house for dinner, having a meal set before you, and then being told that the food and drink are reserved for people who won’t be coming and were never expected.

Why do they do it this way? Why are so few allowed to eat and drink?

The bread and wine symbolize the New Covenant for which Christ gave his body and blood, and in Watchtower theology, the New Covenant is only for Jehovah’s Witnesses who are members of the “anointed” heaven-bound class of 144,000 (Revelation 7:4; 14:1). The vast majority of Jehovah’s Witnesses don’t profess to be members of this class, so they aren’t allowed to partake.

Most of the “anointed” class has already died, so only about 18,000 Jehovah’s Witnesses worldwide partake. Since there are about 120,000 congregations in total, it’s easy to see why no one partakes at most of the Memorial gatherings.

The irony is that in the Watchtower’s New World Translation of the Bible, John 6:53-54 reads as follows: “So Jesus said to them: ‘Most truly I say to you, unless you eat the flesh of the Son of man and drink his blood, you have no life in yourselves. He that feeds on my flesh and drinks my blood has everlasting life, and I shall resurrect him at the last day.’”

The Watchtower argues that a person can “eat the flesh of the Son of man and drink his blood” in a figurative way “by exercising faith in the redeeming power of Jesus’ flesh and blood laid down in sacrifice.”[i] They don’t see the connection between having faith in Christ’s sacrifice and “eating his flesh and drinking his blood.”

It is truly sad.

What attenders actually experience at the Memorial (besides participating in a “meal” at which no one eats or drinks) is a talk geared to non-Witnesses which explains the Watchtower understanding of God’s two-class plan of salvation, along with an invitation for them to participate in a “free home Bible study” at which they will be taught Watchtower doctrine with the goal of persuading them to become Jehovah’s Witnesses themselves.

I have found that attending the Memorial provides a good opening for connecting with Jehovah’s Witnesses and for asking thought-provoking questions about the Watchtower’s two-class salvation system (the 144,000 heaven-bound “anointed” and the “other sheep” who hope to live forever on a paradise earth without ever being in the New Covenant).

Have you ever attended a Watchtower Memorial service? What were your impressions?

The Inner Struggle of Jehovah’s Witnesses: Attempting the Impossible

4 Comments on "Attending the Watchtower Memorial"

Why do JWs continue to attend this service if this was only UNTIL Jesus returned; didn’t Jesus return in 1914, according to the Watchtower?

Great question. The March 1, 1978 Watchtower, p. 6, gives this answer: “With his coming absence and his return in mind, Jesus said to his disciples when inaugurating the Memorial: “In the house of my Father there are many abodes. Otherwise, I would have told you, because I am going my way to prepare a place for you. Also, if I go my way and prepare a place for you, I am coming again and will receive you home to myself, that where I am you also may be.”—John 14:2, 3. Until Jesus came to receive the last of these… Read more »
Reply   -   Share

I am not a JW but have attended the Memorial to get more insight into the Watchtower ‘religion’. The reception was totally dominated by men with the women waiting quietly in the background. I was made to feel like a lost sheep that had returned home, it felt pretty creepy. The service wasn’t too long, but of course it followed WT theology. Then the emblems were passed around by men; no one partook. The drab songs were in praise of Jehovah. I find JW’s to be inoffensive people who have been misled by the WT Organisation. At the Last Supper,… Read more »
Reply   -   Share

Thanks for sharing your experience. You make an interesting point, that the Holy Spirit hadn’t yet come upon the apostles at the time of the Last Supper, so in WT terms they weren’t yet “anointed.” The first time I attended a Memorial, I remember thinking how strange it was to invite people to a meal where no one partakes of anything. It all seemed quite normal to the JWs there, of course. I wonder if they realized how strange the whole thing seems to someone not raised on WT theology.